When designing a system with various virtual components all within an FPGA, transferring data from one module to another is fairly straightforward. Provided the two modules use the same clock, we simply send outgoing data on a rising clock edge, and sample it in the receiving module on the following rising clock edge. The new data has a complete clock cycle in which to propagate from the source to the destination. 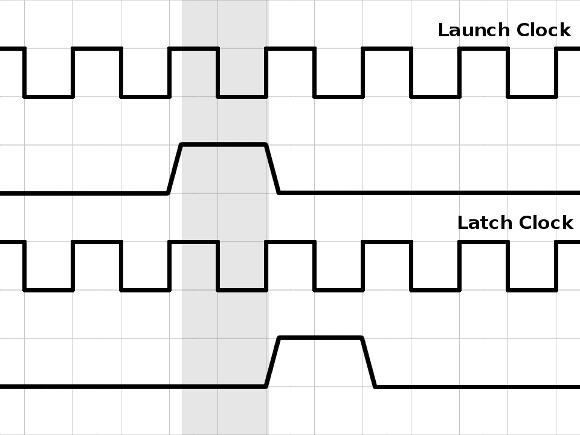 Things become more complicated, however, when the modules aren’t in the same chip. A typical example is making an FPGA-based project communicate with SDRAM.

So why are things so much more difficult when one of the devices is external? In short, delays. Routing delays, delays due to capacitative loading, setup-and-hold delays, rise-and-fall delays. Each of these delays reduces the window of opportunity for sampling valid data, and the narrower that window becomes, the more carefully we have to control the timing of our FPGA project.

In the example depicted above, the shaded area represents the time window during which the destination could have sampled the high level of the source signal and received valid data. This window is very nearly a complete clock cycle in width, and in the example we’ve sampled it right at the end of the window. While it might look like this is too close for comfort, the slight delays as data travels from cell to cell in the FPGA effectively shift the data slightly in time, and the FPGA synthesis software automatically takes care of skewing clocks and inserting extra delays where needed to ensure the data is valid at the clock edge.

Now consider what happens when we send data to an external SDRAM. We must subtract the receiving device’s setup time and the receiving device’s hold time from this window. The valid data window is now much narrower, and our rising latch clock now falls outside that window, so we can’t rely on the sampled data being valid. 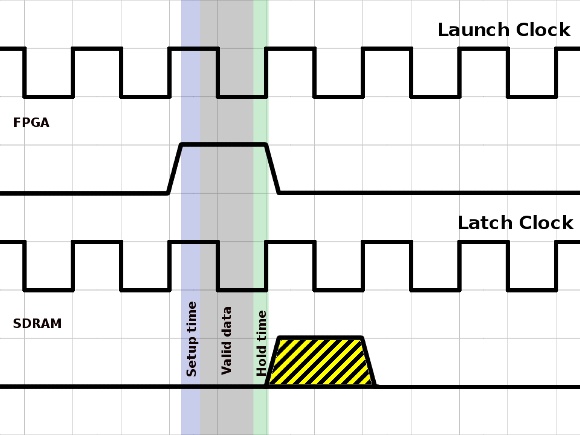 The solution to this problem is to phase-shift the SDRAM’s clock, so that the rising edge falls within the valid data window. On most FPGAs this is really easy – instead of running the design and the external device from the same clock, we can use a PLL to create two versions of the clock, one phase-shifted slightly. 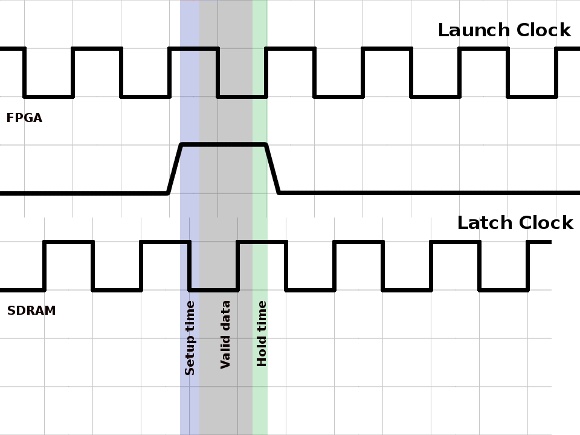 We’ve taken care of sending data to the external device, but what about receiving data? When sending data in the opposite direction the SDRAM’s clock becomes the launch clock, and the FPGA’s clock becomes the latch clock, which means that the phase shift now delays rather than advances the latch clock. There’s no way data launched at the SDRAM’s clock will be ready for the next rising edge of the FPGA’s clock, since they’re very close together – so we must shoot for the clock edge after that. But that’s more than one complete clock cycle away. Is it possible to meet that target?
In the case of writing to the SDRAM, we didn’t have to worry about routing delays, because the delays on the signals and the delay on the clock should be roughly equal, and should thus largely cancel each other out. However, when transferring from SDRAM to the FPGA they no longer cancel out, they combine. This delay actually helps us out, by shifting the valid data towards the clock edge we’re aiming for. There are also input delays at the FPGA, and as long as the synthesis software is given enough information about timing requirements, it will insert extra delays to help align the latch clock with valid data. 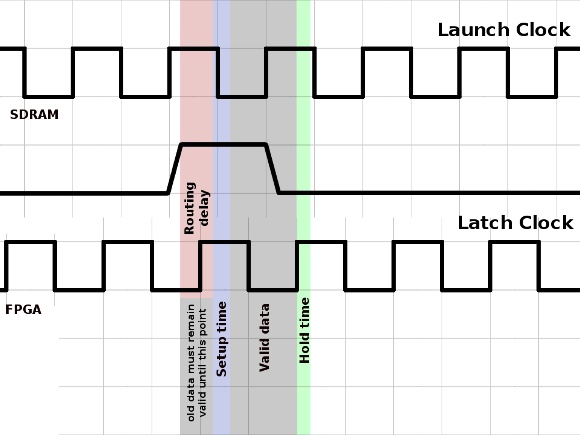 Specifying timing constraints in Quartus is a bit of a black art and finding information on the subject is not easy. The following is my own understanding on how to specify timing constraints from within Quartus – I may have misunderstood some of it, so don’t take this as Gospel, but it seems to work in my own projects.

To begin with create a new Synopsis Design Constraints file, and save it, add it to the project, and on the Assignments -> Settings dialog, go to the TimeQuest Timing Analyzer page, and add the newly created file to the list of SDC files for the project.

So let’s go through a typical .sdc file line-by-line:

This defines a master clock of 50 MHz (period 20ns), coming into the project on the toplevel pin called iSYS_CLK. In most of my projects this clock isn’t used for anything directly – it’s fed into a PLL which generates the real clocks.

Rather than specify the PLL clocks individually, we can have them automatically analyzed and generated.
However, it’d be useful to refer to the SDRAM clock by name, so next we’ll create that one explicitly.
The path of the PLL counter will depend on the name you’ve given the PLL, and also the device you’re using: This example comes from a project which targets a Cyclone II – the path will need adjusting for other devices:

(If you right-click within the Quartus text editor while editing an SDC file, as long as TimeQuest is currently open, you can use the Insert -> Generated Clock menu item to help you find the correct path.)

Adds some margin-of-error to the clocks defined thus far.

Now we come to the trickier stuff. Here we need to refer to the datasheet of our SDRAM. We also need to make a rough estimate of our PCB routing delays. Assuming the SDRAM and FPGA are right next to each other and have only short traces between them, 1 ns wouldn’t be an unreasonable estimate.

I’ll take the following parameters for an IS42S86400B.
The parameters we need to know are:

Here we’re telling Quartus how long after the SDRAM’s clock edge we can expect to wait before valid data arrives at the FPGA. The only pins on the SDRAM that send data back to the FPGA are the Data pins, so the wildcards in the get_ports section reflect this.
For the maximum input delay we take the largest output time and add the estimated routing delay.
For the minimum delay we take the smallest output time and, again, add the routing delay.

Here we’re saying that we have to have valid data on the lines 1.5ns before the SDRAM’s clock edge, and it must remain valid until 0.8ns *after* the clock edge, hence the 0.8 being negative. This applies to all SDRAM-related signals with the exception of the clock, so it’s a good idea to name the clock pin something that won’t be caught by the wildcard. Alternatively, you could specify these lines for each group of signals individually, instead of using such a wide wildcard.

Last but not least, we need to set a “multicycle path” to deal with the fact that we’re skipping a clock edge when reading data back from the SDRAM.

And that’s basically it. Having specified this file, rebuild the project, then run TimeQuest.

From within TimeQuest, run the “Report all IO timings” report, and see if any of them are failing. If they are, adjust the phase shift on the SDRAM clock, which will probably end up being somewhere between about -0.5ns and -2.5ns.