It occurred to me recently that there is a lot of history in the Minimig project, with many people making important contributions over the course of some 15 years.

It also occurred to me that as developers come and go, and new users encounter the latest Minimig cores without having seen what came before, there’s a real danger that some of that history will be forgotten.

END_OF_DOCUMENT_TOKEN_TO_BE_REPLACED

I’ve just released an updated version of the MinimigAGA core for all three of my current target platforms – TC64 version 1, TC64 version 2, and MiST.

The core doesn’t have 100% feature parity between the three platforms, since the MiST has an onboard microcontroller to handle input and storage, while the Chameleon doesn’t. Having to implement an equivalent microcontroller in the FPGA makes some things harder – but other things easier.

For this reason, this time around the TC64 ports have a feature not yet available on MiST – experimental floppy drive sounds. To enable this, simply copy the drivesnd.bin file onto the SD card. If you don’t like it, just delete the file again – there isn’t (yet) a way to turn it on and off from the menus.

Other changes this time include the addition of a very basic LED Audio filter implementation – not accurate, but just good enough to make the going-through-tunnels sound effect in Lotus II work, and Slingshot on Atari-Forum has put some hard work into debugging the CPU core, and found an issue with stack frames which was preventing certain Graftgold games from working in ‘020 mode. His fixes to the CPU are included.

I’ve also made some timing tweaks on all three platforms so that all of them build with clean timing reports.

MiST users can find the latest version of the Minimig core at the official MiST binaries repository.

After porting the MiST’s Minimig core to the Turbo Chameleon 64, I spent happy few weeks adding extra features including, most notably, RTG support. A number of people have kindly supported me in this endeavour, both directly via PayPal and also on Patreon – and I’m very grateful for this support.

None of this would have been possible without building upon the MiST’s AGA core, though, so it seems only right that I should port my improvements back to the MiST.

END_OF_DOCUMENT_TOKEN_TO_BE_REPLACED

If it’s seemed quiet here lately, that’s because I’ve been hard at work improving the Turbo Chameleon 64 ports of the Minimig core.

The two main features added since the last release are an experimential implementation of the Akiko Chunky-to-Planar converter which can be used by a handful of games to increase video performance, and an experimental P96 retargetable graphics driver.

END_OF_DOCUMENT_TOKEN_TO_BE_REPLACED

I teased the new core on YouTube a couple of days ago:

At the same time I announced that, in response to several people prompting me in the past, I now have a virtual tip jar – so anyone who wishes to contribute towards the development of this and other cores can now do so.

One off donations are welcome at https://www.paypal.me/robinsonb5 and will be much appreciated – but I found that pretty much everyone I spoke to about this was telling me I should set up a Patreon, too – so I’ve done that. Anyone who wishes to contribute regularly can now do so at https://www.patreon.com/coresforchameleon

I’m not planning to paywall cores or releases – that’s not my style – but as an incentive for supporters, I’ve added a “Core Supporters” page to the On-screen Menu, which I’ll use to thank by name anyone who donates £20 or more via PayPal or supports me on Patreon at the second tier.

In other news – I’ve just released the first beta – see the Turbo Chameleon 64 section elsewhere on this site.

Over the last few days I’ve been attempting to replace the OpenRisc control CPU within the DE1 and DE2 Minimig cores with EightThirtyTwo – and it’s fighting me every step of the way!

Firstly, why do I want to do this? It’s a long story…

END_OF_DOCUMENT_TOKEN_TO_BE_REPLACED

I found out recently that there is now a second version of the Turbo Chameleon 64 cartridge for the Commodore 64. The reason for this is, apparently, that the Cyclone III FPGA that was used in the original design has been superceded and is difficult to obtain at affordable prices. For this reason Individual Computers have redesigned the cartridge to use a Cyclone 10 FPGA instead. The model chosen is essentially the same thing in a different package, so porting cores would simply be a case of recompiling with the new device and pinout as the target – except they’ve also taken the opportunity to make small improvements to the design. For this reason it now takes a little bit of work to port existing cores to the V2 hardware.

I now have an initial build of the Minimig core for V2 hardware, which is available as before on the Minimig TC64 Snapshots page.

Edit: Since the V2 hardware is likely to attract newcomers to the Chameleon platform, I should explain what to do with the two files in the snapshop archive:

Another point to bear in mind is that the core doesn’t yet attempt to translate the C64 keyboard to the Amiga – so far just the run/stop key is used to toggle the OSD – so you will need a PS/2 keyboard to use the core for anything that requires keyboard input.

Source is availabe, as before, on github.

Always worth a plug, 880 Gamer is a magazine produced in the style of the half-a-dozen or so glossy news-stand magazines we could choose from back in the Amiga’s heyday.

Distributed as a PDF, it also has two coverdisks in .adf format, and printable labels for each, should you wish to write them to physical disks!

All five issues of 880 gamer produced to date can be found at: http://www.users.on.net/~stanners/

A few weeks ago I pushed the PSoC Creator project for my Sega-6-button-to-CD32 converter project, but anyone wishing to build a converter would need to know the pin mapping.  This is defined within the Creator project, but figuring out which pins on the DB9s need to be wired to which terminals on the board would be pretty tedious – so here’s a wiring diagram for the benefit of anyone who wants to have a go.

(Please note, the board shown here is the CY8CKIT-049-42XX – the identical-looking 41XX won’t work because the chip lacks the programmable logic the project uses to create the shift register.) 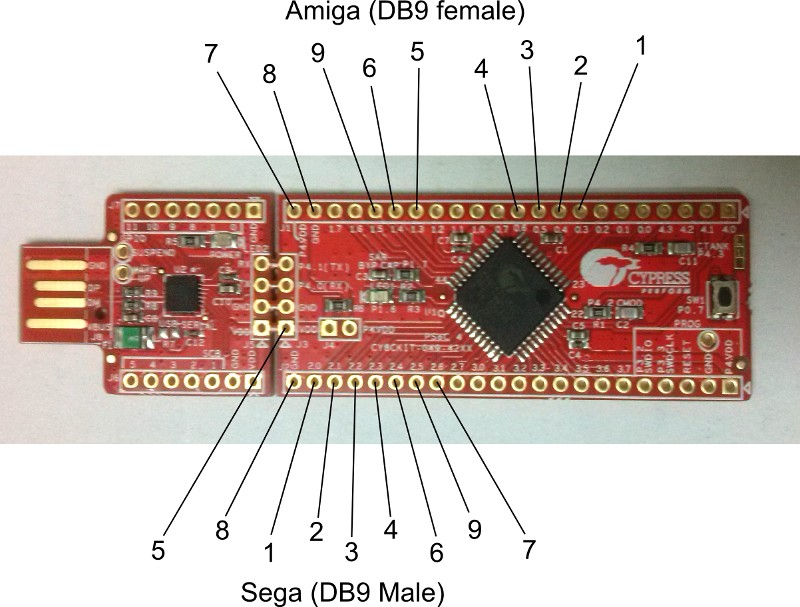